Only 19 more days until I leave for Botswana

My camera bag is packed and I'm counting the days!  Only 19 more days until I go back to Africa.

Africa has constantly been in the news showing the suffering of the people in West Africa because of Ebola.  My heart goes out to those people and I hope that they find some way to bring the Ebola crisis under control.

Friends of mine have asked me if I'm worried about going to Botswana.  Although anything is possible, the possibility of getting Ebola in Botswana is highly unlikely.  The epicenter of the crisis is closer to Europe and Brazil than it is to Botswana.

The company who put my safari together sent out an email that said, "Its more likely to get eaten by a lion in Botswana than to get Ebola."  When I read that, something that occurred on my last trip to Botswana came to mind.  (No one got eaten by a lion)

It was our first night in Africa on that trip and anyone who has been will understand that the sounds of Africa are very noticeable on your first night!  Where most of the rest of the world goes to sleep at night... the wildlife in Africa comes to life.  I woke up and heard two lions talking to each other far off in the distance.   Every time I woke up, I could hear them and they were getting closer and closer.  Right before dawn the sounds were coming from right next to our tent!!  I've been told that Lions don't like the taste of canvas, so I wasn't overly concerned but my heart started pounding a little bit faster.

The sounds stopped and we started to get ready for our day.  At breakfast we told our drivers that there were lions right next to our tent!!  They chuckled and assured us that it was only the baboons who were in the trees all around us.  Kay and I rolled our eyes and told the drivers... "Uh those weren't baboons!"  I don't think they were convinced.   We packed all of our gear in the Jeep and started out for our first game drive in Botswana!

To humour us, our driver and tracker drove up to our tent to check for tracks.... they came back somewhat excited and said... "LIONS!"  and we roared off following the tracks!

The tracks went around a big wet area (lots of those in Botswana) and our driver decided to take a short cut.  He told us to get the gear off the floor of the jeep and to sit on the back of the seats?  The short cut was right through the middle of the big wet area..... the water gushed in and covered the floor of the jeep and at one point was almost as high as the top of the door! 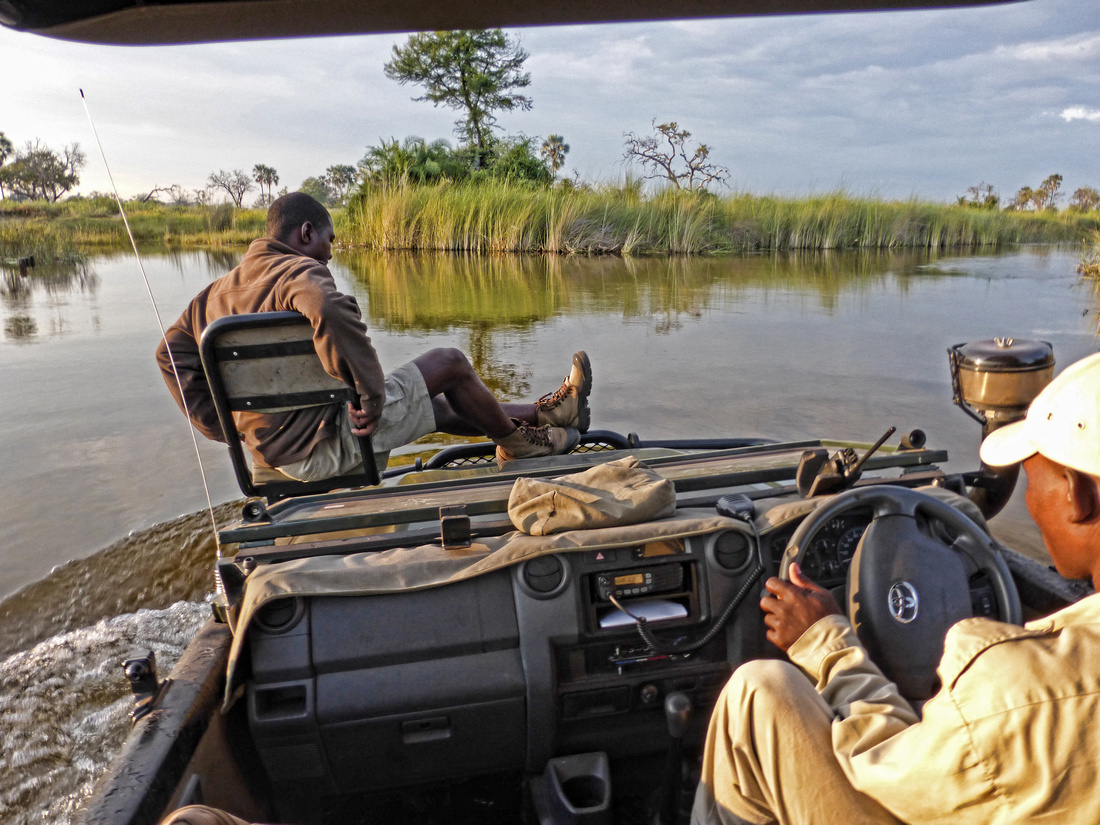 We found the tracks on the other side and followed them to where we finally found two lions under a bush snacking on what was left of an old kill. 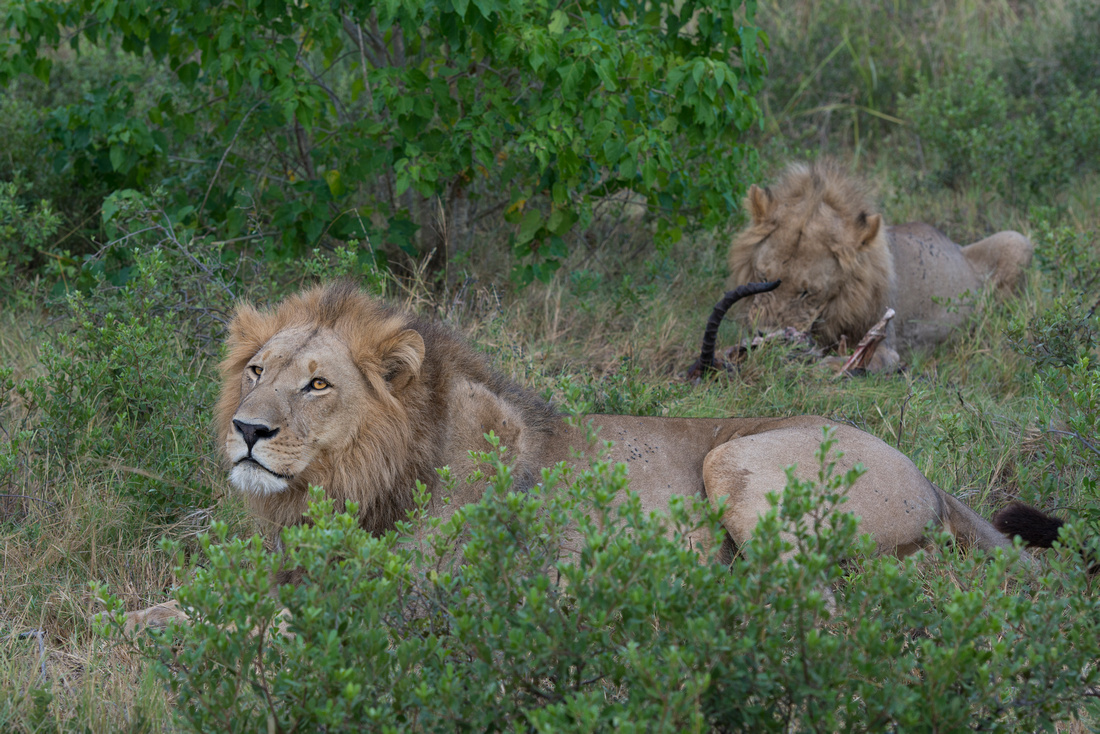 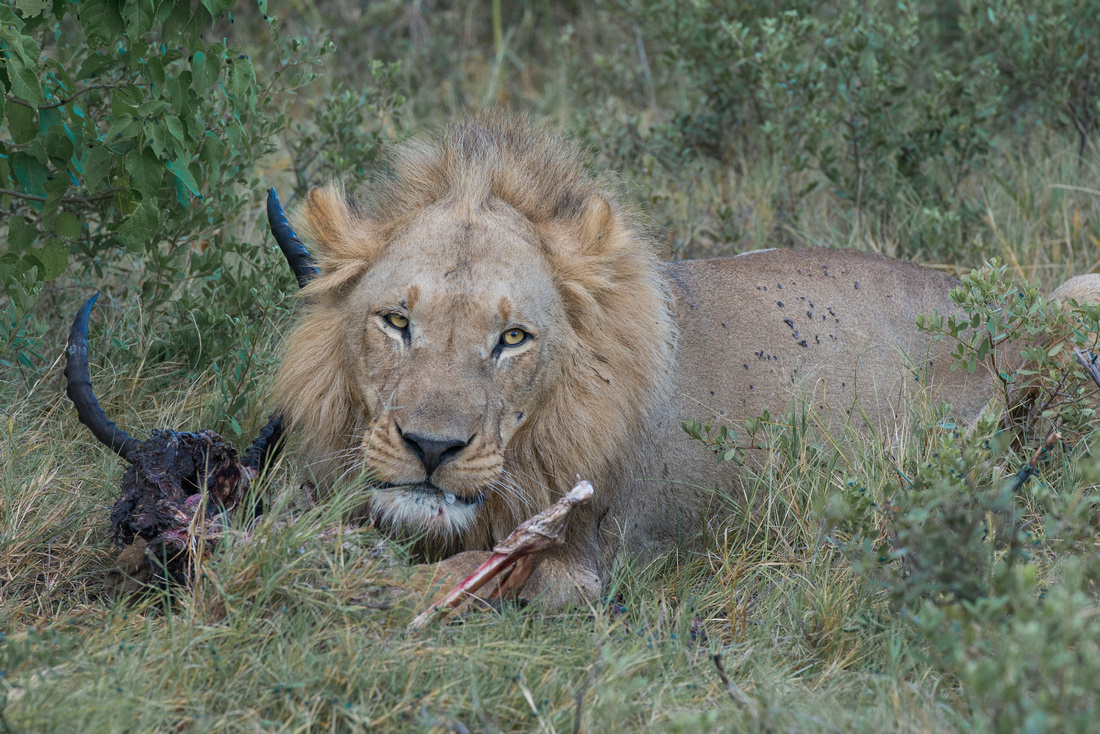 We watched them crunch the bones for a while until they got bored and moved off.  We followed them for miles... 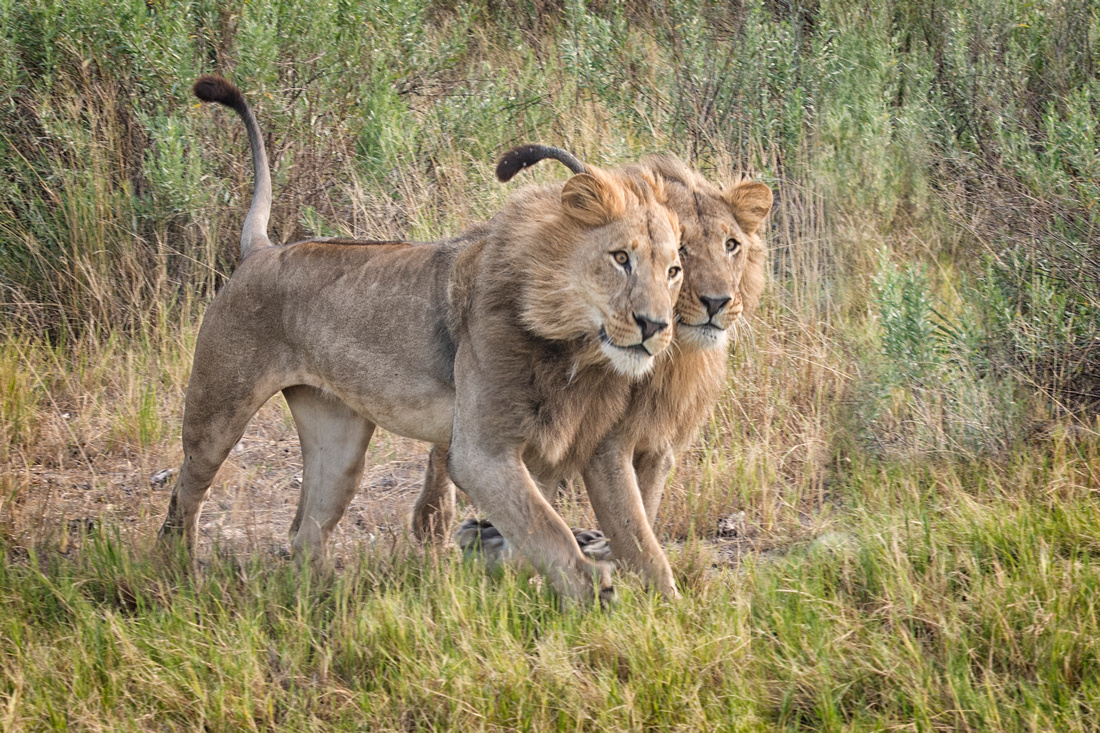 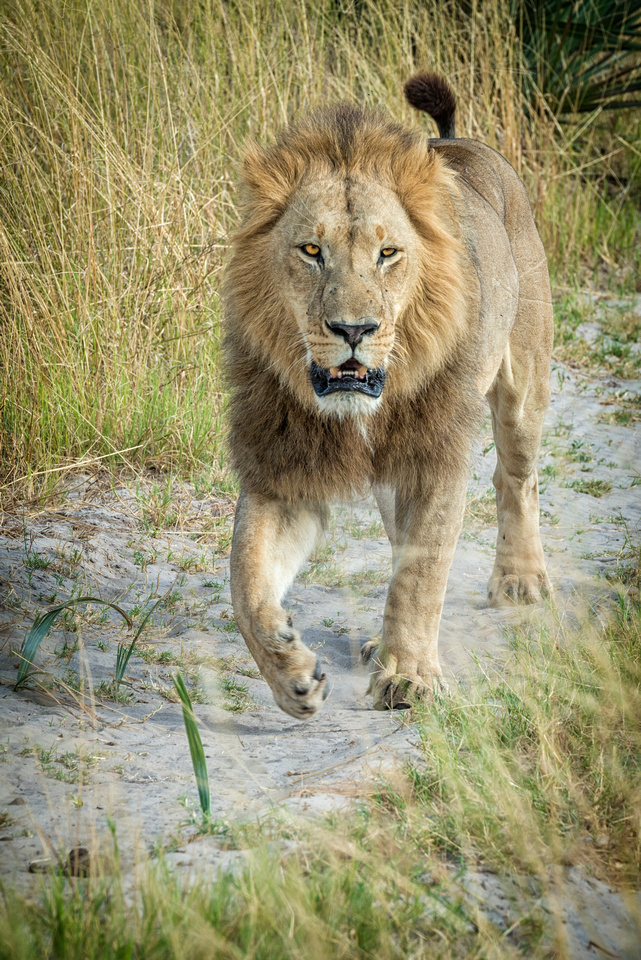 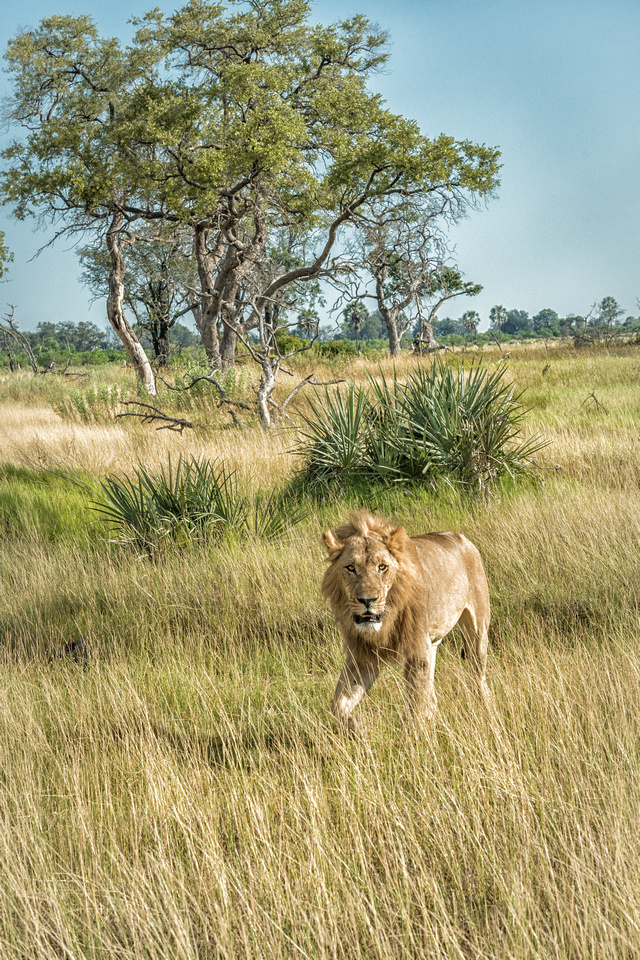 They eventually went into some deep grass where we heard a bone chilling roar and another sound?  The drivers said... "Leopard" and away we went.  Apparently the lions were chasing after a leopard... in deep grass........ so we only heard the commotion and have no photos... rats!   The tracker found the lion tracks which went one way  and leopard tracks which went another way.  We opted to follow the leopard.

We found this fellow, nicknamed the "Shy Leopard", and followed him for a while until he disappeared into the tall grasses.  This is the last shot I got of him. 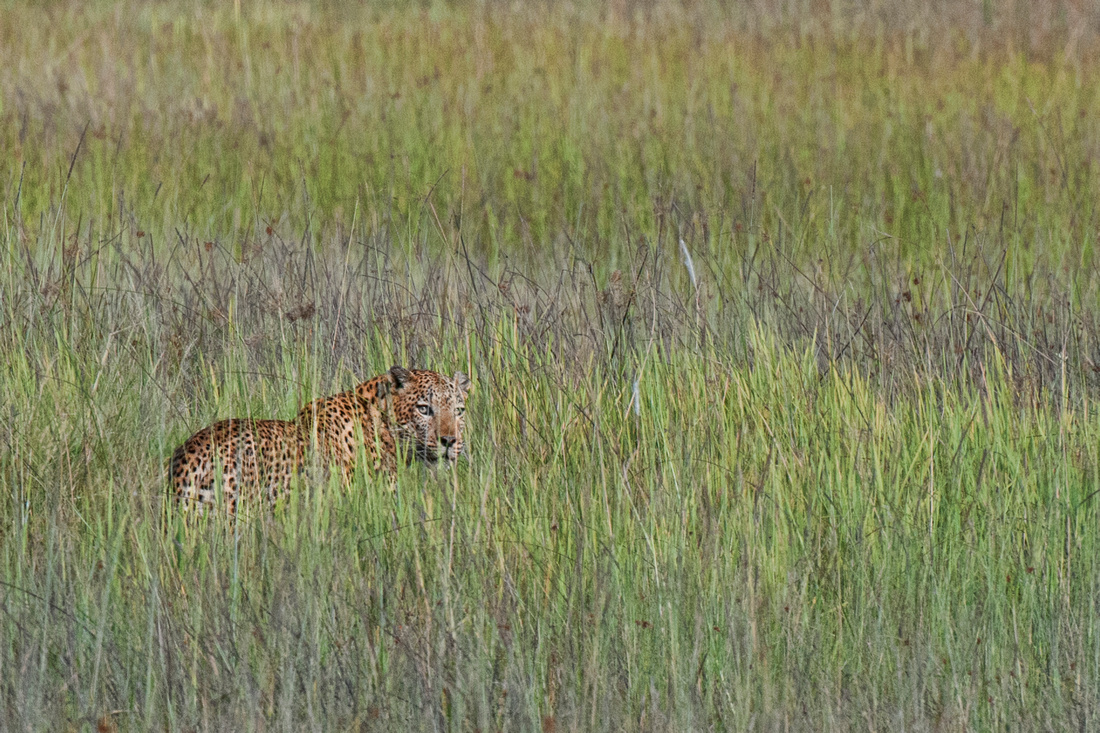 I don't think we will have internet access at most of the camps in Botswana... so I won't be posting any updates or photos until I'm back.

19 more days and I'll be on my way... hopefully many more experiences like this are waiting for us!

Tim Driman(non-registered)
Have an absolute blast.....You haven't mentioned where you are going but if you are anywhere near Kasane ( Chobe ), you HAVE to visit the Pangolin guys....Guts and the gang....Their photo boats are one of a kind...