How to shoot the Milky Way

After getting somewhat proficient at using my camera during the day, I decided that I wanted to try night photography... adding the Milky Way over a scene, literally opens up a whole new world.  I became hooked on Night Photography! 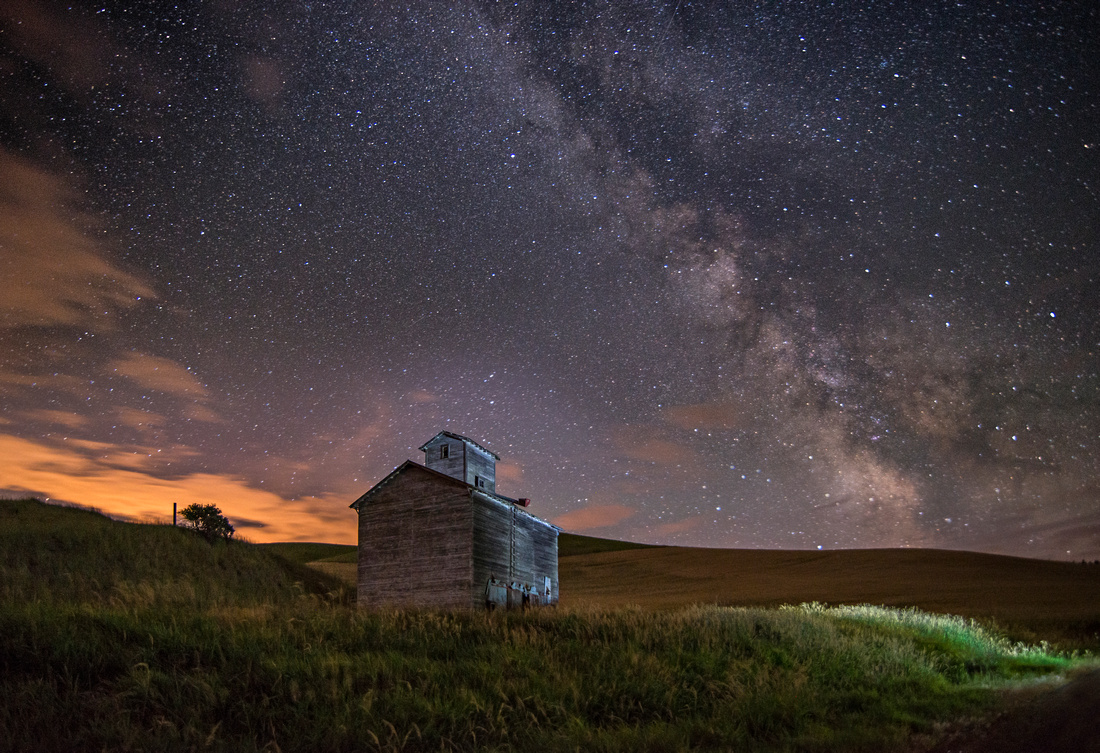 Before you head out on your shoot, you need to do some planning to know the best times and locations to maximize the brightness of the Milky Way.

First you will need to know when it will be dark enough to shoot.  The best time to shoot the Milky Way is once the sun is at least -18 degrees below the horizon at this point it is truly dark out.  Beautiful blue tones in the night sky can be achieved by shooting during Astronomical Twilight which is when the sun is between -12 to -18 degrees below the horizon, however the Milky Way will be slightly washed out during this time.  You can find the level of the sun on some great apps that we can use for Night Photography, my favourite one is SkySafari4, but there are many others like PhotoPills, Stellarium (which is free for your PC) and TPE The Photographers Ephemeris.

Moon Phase -  Knowing the phase of the moon is one of the most important factors in shooting the Milky Way.  It is almost impossible to see the Milky Way during a full moon.  The best time to shoot the stars is during a New Moon or the week before and after.  It is also possible to shoot the Milky Way during other phases of the moon but you need to know when moonrise and moonset is, then you can go out prior to moonrise or after moonset as long as it falls around Astronomical Twilight.  Our Apps will show us the phases of the moon or you can find that information by doing a search on Moon Phases on the internet.

Light Pollution - We will want to find a dark location, far from city lights, for our best chances of capturing the Milky Way.  Dark Sky Finder is a good app to use.  I live in a city of about a million people and find that I need to get at least a 45 minute drive away (to the west, east or south) to get moderately dark skies.

Seasons -  The seasons will affect what we see in the night sky.  We can see the Milky Way at any time of the year in the Northern Hemisphere but the best and brightest part, the Galactic Core or Galactic Center, is only visible at certain times of the year.  Where I live the best times are between April and October.

Weather - We can have planned a photo shoot and know all the factors on when and where the Milky Way will be over our subject, but the final deciding factor is the weather.  If we have more than 20% cloud cover we probably won't get any good shots.  A useful resource is the Clear Sky Chart or its app CSC. 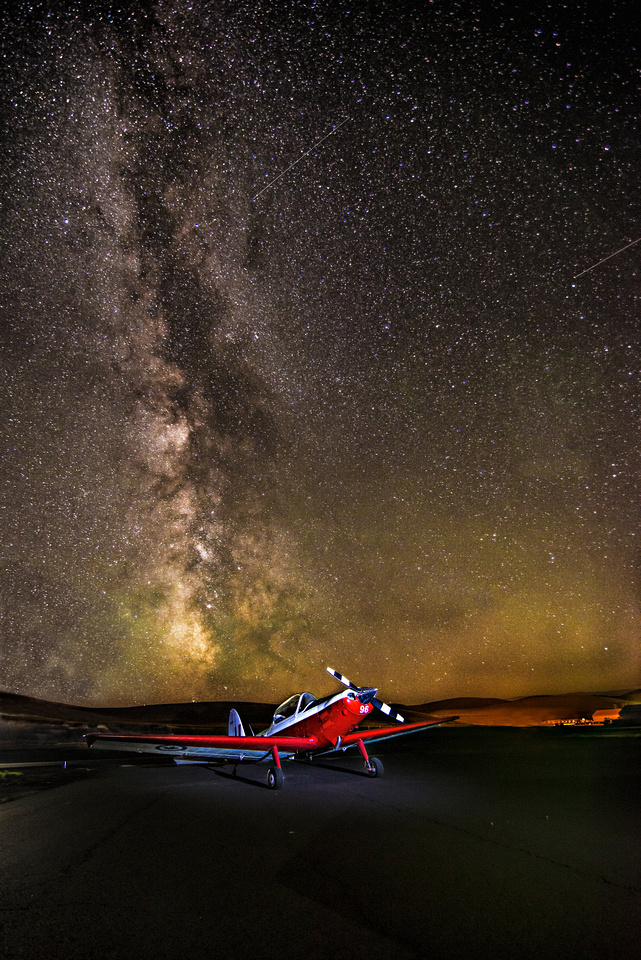 Having the right gear will make a big difference in the quality of your photos.  With all of your gear, you should become comfortable using it in the dark.  You need to know where all the buttons and settings are on your camera without even looking at it.  Someone once said that to get ready for night photography, you should practice in your closet.

Tripod - We want to use the sturdiest and heaviest tripod we own.  A flimsy or light tripod will move slightly in a light breeze and affect the sharpness of your shot.  The best shots will be achieved if you keep the center of gravity low, so don't raise those center columns!

Battery - Long exposures will eat up your battery power so carry a few spares with you.

Filters -  UV filters usually catch dew as they trap a layer of air between them and the lens, I recommend that you remove all filters.  I was shooting with someone and he kept saying that he wasn't getting anything on his shots, his settings were all correct and we were kind of stumped as to what was going on.  Finally I saw that he had a polarizing filter on the front of his lens that was blocking out a large percentage of the available light.  NEVER leave your polarizing filter on the lens!  :D

Lens/Hand Warmer -  If you live in a dry climate like I do, dew is likely never going to be an issue.  If you are having issues with dew building on your lens, then you should take some hand warmers with you and attach them to your lens with a rubber band.  If the lens is warmer than the ambient air, dew is less likely to form on your lens.

Lenses -  For night photography, you will want to invest in a wide and fast lens.  The wider the focal length of your lens, the more of the Milky Way you'll be able to capture in your shot.  Lenses with an aperture of f4 are suitable but f2.8 or less are even better.  Some of the prime lenses of f1.4 or f1.8 tend to be soft and work better when stopped down to f2.0.  My lens of choice is the Rokinon 14mm f2.8 or the Rokinon 24mm f1.4.  Both are manual lenses but we don't use the automatic features of a lens at night anyhow, so these lenses are perfect.  They also sell under the brand name Samyang or Bower.

Camera Body - I shoot with the Nikon D750, its ability to shoot in low light at high ISOs with little to no noise distortion is amazing.  Whatever camera you choose, you will want it to be relatively noise free at around ISO 2500 preferably up to ISO 3200 or 6400.  I list the camera last in my list of what gear to use because you will likely just use the camera you have until you get bitten by the night photography bug, then you'll upgrade to a camera that produces great noise free images at high ISOs.

Miscellaneous Gear -  You will need a headlamp or flashlight.  I recommend that you carry a small penlight so that you can check camera settings without illuminating the entire scene.  Many people recommend a red light, so as not to affect your night vision... which would be fine, but the minute we look at our LCD our night vision is affected.  Also if you forget to turn off your red light or someone else is using a red light while you are shooting... it will completely ruin your shot with an unnatural red glow.  Don't forget the bug spray! 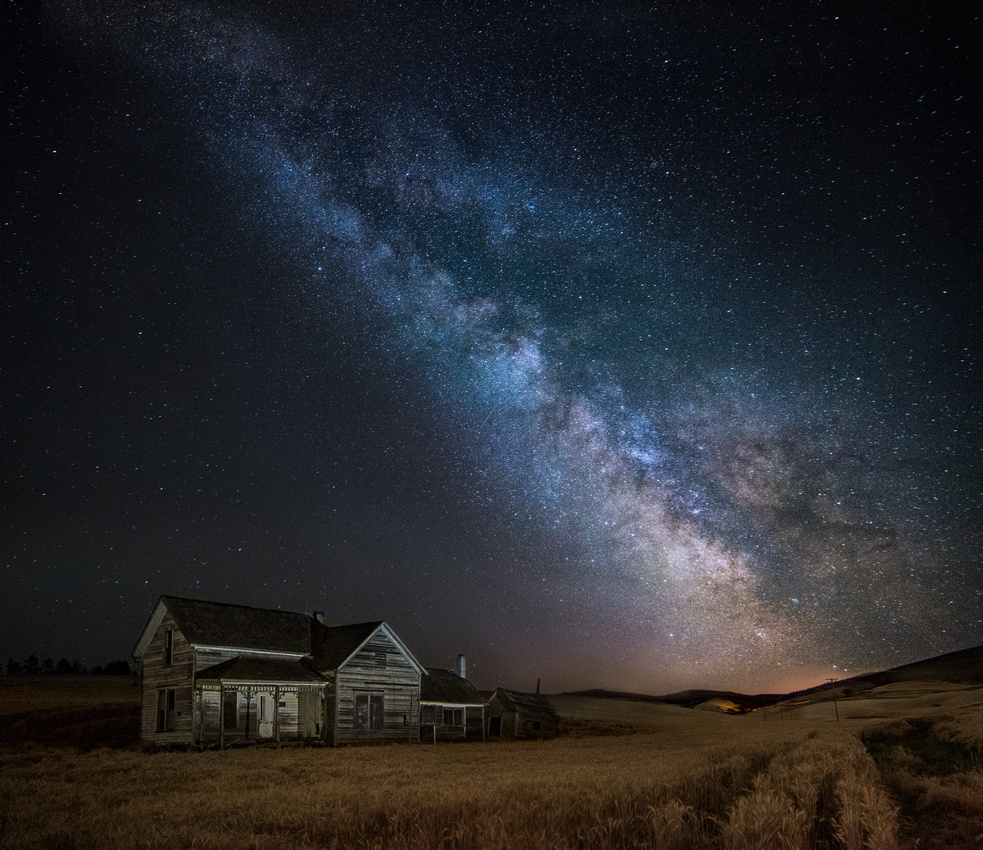 A good starting point for your settings to shoot the Milky Way on a full frame camera with a 14mm lens,  f2.8, ISO 400, 25 seconds.  You can adjust the ISO and shooting time in the field to see the different results.

Aperture -  We will generally shoot wide open if we have an f2.8 lens.  If you are shooting with a prime f1.4 or f1.8 lens, you will most likely get better results if you stop it down to f2.0, this will help reduce coma and vignetting that can be an issue.

ISO -  A good ISO for shooting a dark sky would be anywhere between ISO 2500 - 6400.  When shooting during the day, we tend to shoot at the lowest ISO possible to reduce the affects of noise.  However, at night we want as much light to hit our sensor as possible so as to pick up all the little details of the Milky Way so it is best to shoot at a higher ISO.  Noise is also less of an issue in a completely black sky.

LCD Brightness -  Your LCD will fool you into thinking that your photos are brighter than they actually are, so it is not a good gauge of what you are actually shooting.  Reviewing your photos in the field will also annoy anyone who is shooting around you, so I turn the brightness down to -2 or -3

Focusing -  A sharp focus can be the most difficult thing to achieve in the dark.  Autofocus will not work on dim stars so we have to learn to manually focus at night.  Most people will focus in Live View.  Find the brightest star in the sky and focus on that, zoom in as tight as you can in Live View and adjust the focus until the star is the sharpest.  You can tape the lens with a non-sticky masking tape or make a mental note where the marks are on your focus ring.  After you have been shooting in the dark for a while, you should automatically know where the point is on your lens that has the best focus at infinity.  When I go out to shoot, I just set the focus to the point on the lens that I know is usually in focus.  I then take a test shot and review the shot on the LCD... I'll zoom into a star and see if it is in sharp focus, if it is in focus I just keep shooting... if it is soft I will make a minor adjustment and take another test shot.  Anytime you are shooting at night, it is important that after taking several photos you review a photo and zoom into a star on your LCD to make sure that it is still sharp, you might accidentally jostle the lens and change the focus without knowing it.

Stacking or blending shots -  I will often take a very long exposure of a scene in order to get the foreground properly exposed, in this 2 or 3 minutes shot the stars will look blurry.  Then I take my 25 second shots to properly shoot the Milky Way.  When I am at home using Photoshop, I can combine or blend the very long exposure shot with the 25 second shot to make a photo that looks properly exposed, both foreground and sky.  So always remember to take a long exposure of the scene so that you can use it in post production.

Composition -  It is hard to properly compose an image in the dark.  I usually look at the scene and decide where I want the edge of the foreground to be in my shot.  Then I'll take my flashlight and paint it back and forth on the ground on that line... as I'm doing that I will compose my shot in my viewfinder.  Then I'll shine the light on the main subject or building that I'm shooting and make sure its in a pleasing location in my shot.  I'm almost ready to shoot!

Leveling your Horizon -  The last thing I do before shooting is make sure that my horizon is level.  Many cameras have an in camera level, so if you have that... use it!  If you don't have that feature, you can purchase an inexpensive bubble level to make sure that your horizons are straight.  You are finally ready to shoot! 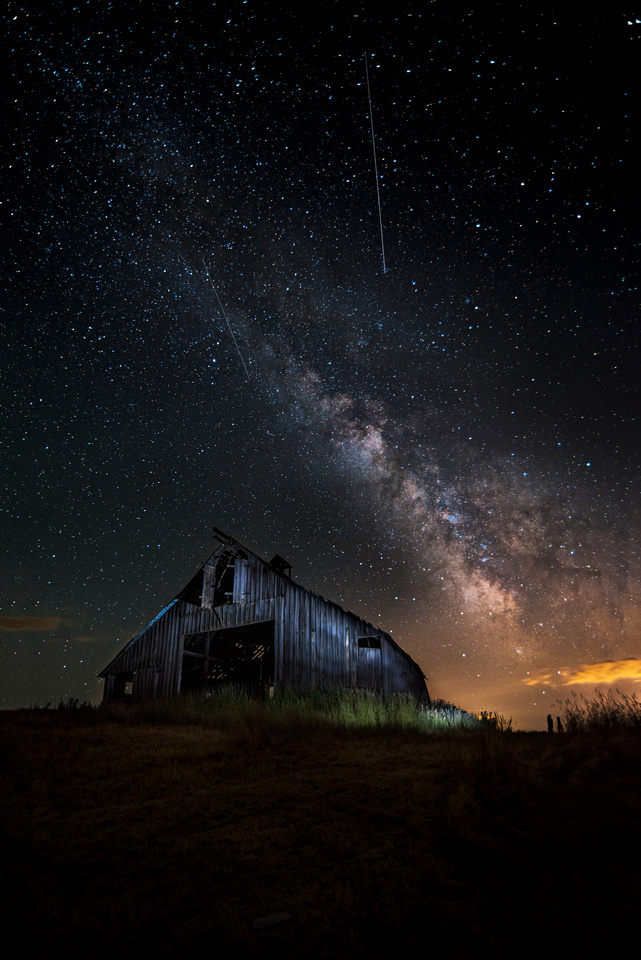 APPS -  You will take a lot of the guess work out of night photography if you arm yourself with some of the great apps available to us.  I like Stellarium, SkySafari4 and PhotoPills.  With these apps you will enter the GPS location of your shoot and the date and it will show you where the Milky Way will be at any specific time.  So if I'm going out to shoot a certain building, I can punch in the GSP data and then I will know exactly what time the Milky Way will be in the best location over the building.  Stellarium is free to download on your PC and is a good program to start with. 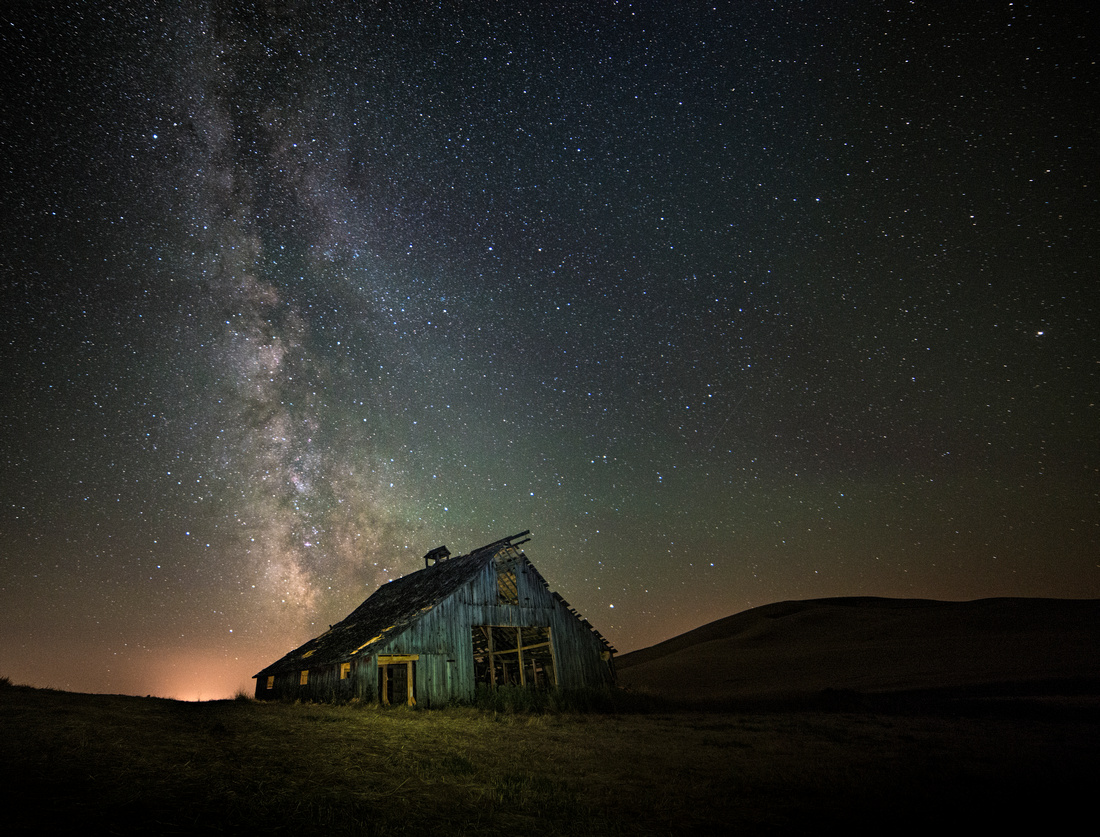 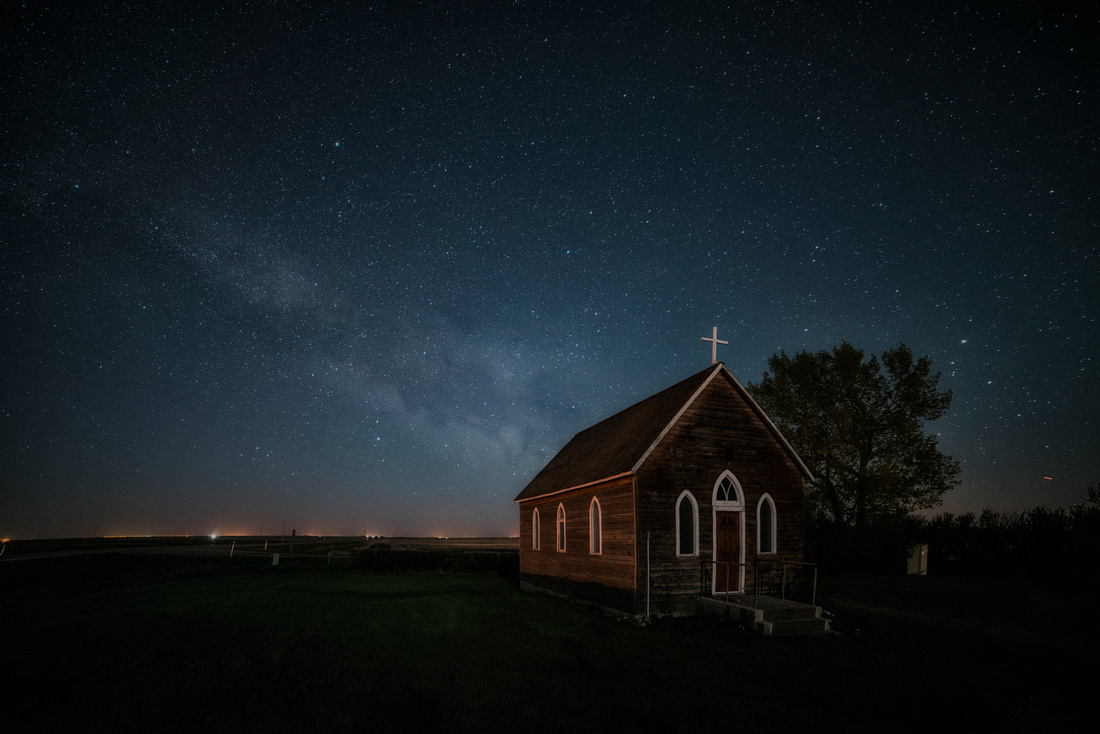 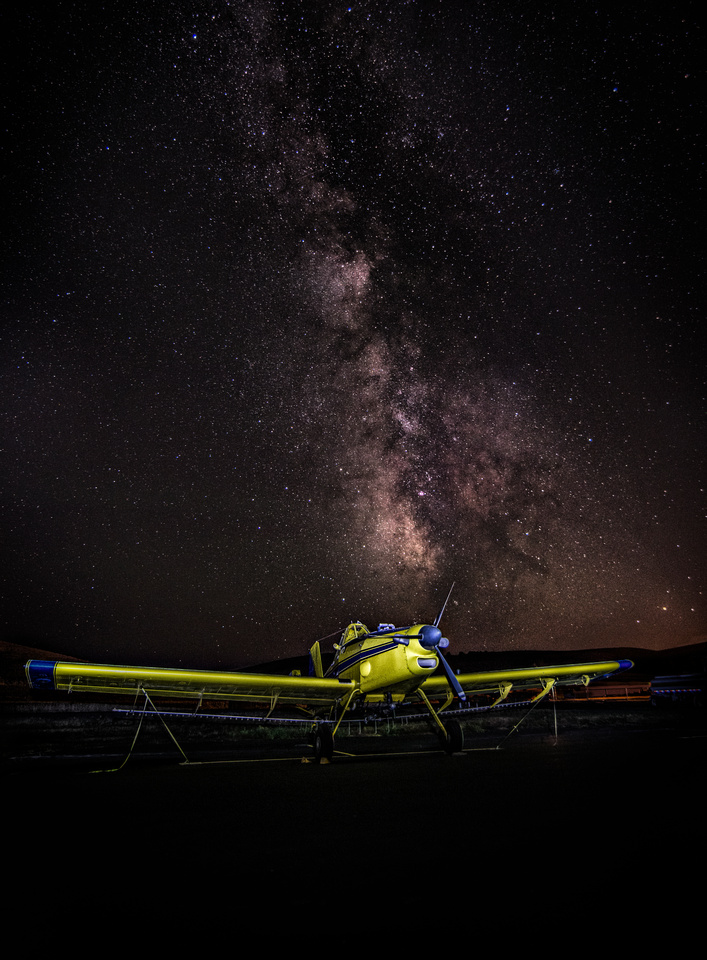