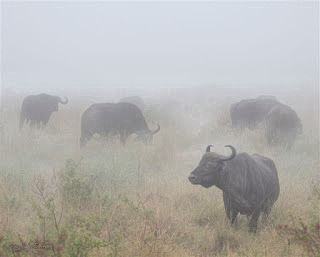 We got an early start to the day and descended into Ngorongoro Crater which was blanketed with thick fog. We passed a large group of Water Buffalo grazing in the fog. The crater is roughly 20 miles across and is considered a conservation area… it is also one of the last places where you might be able to see Rhino. 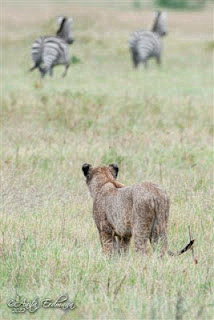 Almost as soon as we got to the crater floor the fog lifted and we had our first sighting of the day…. Two young lions who attempted in vain to hunt a Zebra. The Zebra saw the lions without any difficulty and ran away. Soon after, a large pride of lions came over a little hill and the two young ones ran over and eagerly greeted everyone.

They all came to the road and used the cars as camouflage to hide from another herd of Zebras. One of the larger females was probably a decent hunter but most of the other lions in the pride were young and dumb… so every time she attempted to sneak up on a Zebra, a young lion would show itself and the Zebras would run away. The lioness eventually gave up and they all lay down in the grass to snooze. 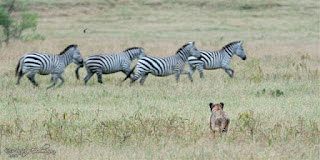 We also saw two sets of two large males…. One group was feasting on a wildebeest… the other had eaten most of a zebra and were flat on their sides sleeping. One of the males lifted his head and we could see what a magnificant creature he was... he had a huge beautiful mane! 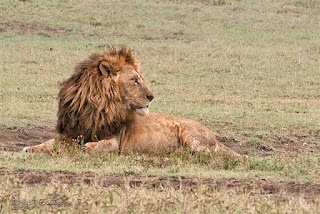 There were elephants, zebras, wildebeest, water buffalo, jackals, lions, impala, gazelle and hyenas in the crater. We had hoped to see a Rhino so that we could say that we saw all of the big five… and off in the distance we saw a big lump that everyone was driving past.

I told Harry to stop because I thought they were Rhinos... sure enough when we looked through our binoculars and long lenses we saw two huge Rhinos grazing with some wildebeests. There are only 12 of these amazing creatures in the crater so we were very lucky to see them.

After a long day in the crater we drove to a Maasai Boma and had a tour of their village and watched them do their traditional dancing and jumping. They showed us how they lived and explained their culture to us. A man's wealth is counted by the number of cattle he has. If he has many cattle he can trade 10 to 15 of them in exchange to the father of a woman and she will become his new wife. The Maasai can have as many wives as they want. The chief of this village had 8 wives and 53 children. He could lounge around all day and talk with the other elders while his young male children tended his herds and his wives gathered wood for the fires and brought water from miles away for the cleaning, drinking and cooking. He probably talked to the other elders about trading his female children for more cows. I guess its good to be a Maasai man... not so good to be a Maasai woman! 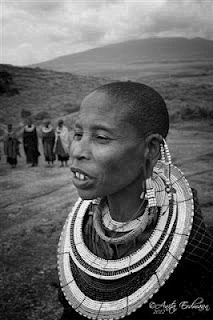 Our eye opening visit to the village was a great way to end the day!

Tomorrow we will go to Lake Manyara and have our last game drive before returning home.

Its been an amazing trip and although its always sad to end a vacation… its always good to come home too.