Homestead on the Palouse

I just spent a week in the Palouse with several members and friends of the Calgary Camera Club.  It was my fourth time photographing the Palouse and each time I go, the colours and light are different.

One of our stops was the old Weber Homestead.  We spoke to the family who owns the land which the much photographed old Homestead sits on, they were absolutely shocked when I told them that I had seen a photo of that house and because of it had done some research and learned about the Palouse.... and then decided that I needed to go and photograph the old buildings and the beautiful landscapes.  It is incomprehensible  to them, why people would want to come from all over the world to photograph their old run down house. 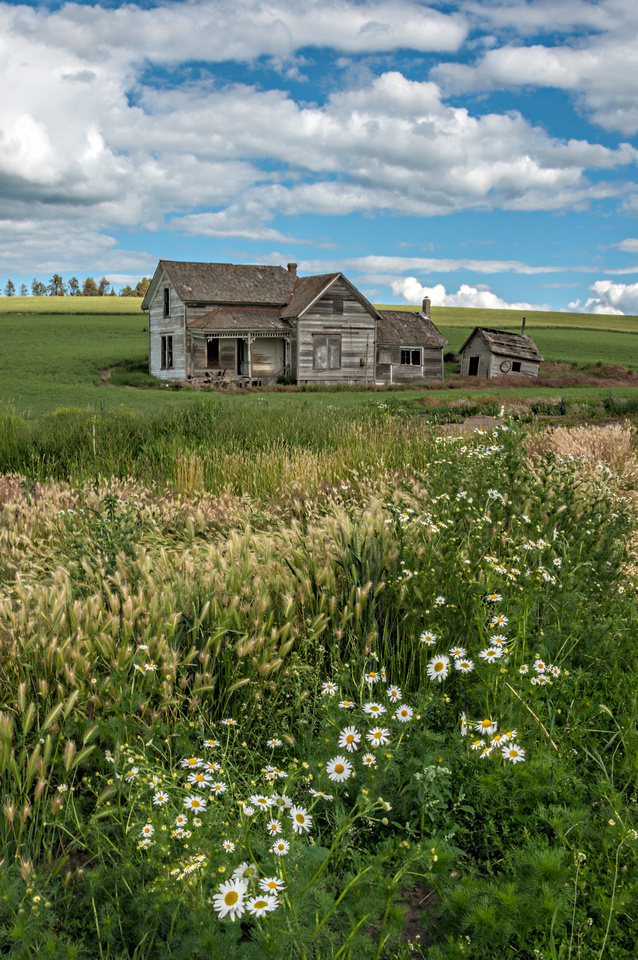 Unfortunately, some photographers haven't been very respectful of the house and their property.  Some photographers have stomped down their crops (their income) to get closer to the house.  They've entered the house, even though there are no trespassing signs on it and someone has taken items out of the house... including the corner post on the front porch.  The owners are worried about their liability if someone goes into the house, which is falling apart, and injures themselves.  They said that to protect themselves from any potential liability, they have considered tearing the house down.  If you are going to photograph the house, please respect their property.... don't trespass and don't damage their crops.  If we don't respect their property, we are going to lose this old house as a photographic subject!

They told us some interesting things about the house.  The land has been in their family for 5 generations.  The original house was a small log home and then the house that we see now has been built around it.  The logs remain in the walls of the middle section of the house.  On the far right is a smaller structure which is a summer kitchen, with temperatures soaring above 100 degrees in the summer... many farmers built a kitchen apart from the house in order to keep the main house cooler.  If there was a kitchen fire, there was a better chance of saving the main house and only losing the summer kitchen.  They said that there is an upstairs window and they are assuming that there is a room there... but they can't find the entrance to the room.  They think that it was a 'panic room or safe room', if indians came... the family could hide in the room while the house was being gone through and then come back down when it was safe.