March 21, 2012  •  Leave a Comment
We had a good night sleep in the African wilderness... there were sounds all night just outside our tents. We got up early this morning to get an early start on safari.

We just got back from a hot full day of safari in Tarangire National Park.

Tarangire is home to vast herds of elephants.... I'm sure we saw more than 200 or 300 elephants... from month old babies to large bulls with their long tusks! 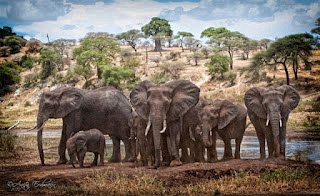 The drivers were saying that there were lions near a dry river bed and our driver Harry managed to locate them. They were pretty far off but we saw 5 of them snoozing in the shade. Occasionaly one would raise his head and have a look at us but then they went right back to their nap.

There were about 4 jeeps under a tree and everyone was looking up at a nest with a python in it. YUCK! Don't they know that Pythons like to drop out of trees to kill their prey?! We stopped for a few pictures... **shudder**!

For lunch we stopped and had a picnic lunch overlooking the Tarangire River. The people who were leaving the table mentioned something about "look out for the monkey's they're going to steal your food". We looked around and wondered what they were talking about because there wasn't a monkey in sight. Tom went to the washroom and Sandi, Harry and I started to enjoy our lunch... from out of nowhere comes this devilish little monkey and grabs Tom's box lunch and turns to run... Sandi grabbed the box... the monkey grabbed the sandwich and away he went. As we left the table, we warned the next group of tourists about he monkey's... they probably looked around and wondered what we were talking about, I wonder if the monkey's got their sandwiches too! 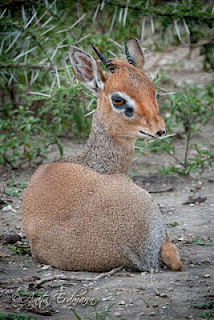 elephants, LIONS!, zebra, giraffe, python, a rare water deer, Thomson and Grant gazelles, monkeys, wildebeest, storks, lovebirds, belted mongoose, warthog and a million different types of birds... I'm sure that haven't even listed half of what we saw!

Tomorrow we'lll drive about 400 kms into the Serengeti for two days at our next lodge.