April 11, 2012  •  Leave a Comment
Yesterday we drove from Tarangire to the middle of the Serengeti. With several detours to look for game it took us about 11 hours to get to our camp at Mbuzi Mawe. The Serengeti "Highway" is the bumpiest, dustiest road that I've ever been on.... its washboard surface is criss-crossed with deep ruts and strewn with sharp rocks. Luckily we didn't get a flat tire unlike many of the other vehicles at the side of the road.

Once we got nearer to our camp, Harry our driver, drove towards were he had heard that there was a leopard. We lined up with about 40 other jeeps and looked in the direction of a large Acacia tree... apparently the leopard had been there earlier but now he was hiding someplace in the deep grass. 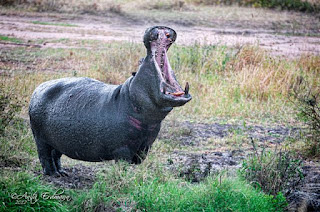 We drove further and saw a herd of hippos sleeping in a muddy pool. There was a cute little baby who had crawled up onto his mothers neck and fallen asleep. One of the hippos was standing at the side of the pond and making loud angry hippo noises... we got a good look at the inside of his mouth, UGH! We passed many more animals... until we saw the highlight of the day. Near a watering hole there was a large pride of lions... between 13 and 18 of them... most of them were laying on their sides snoozing with a belly full of zebra. A couple of the lions were behind a bush fighting for a zebra leg... one of them let out a mighty roar that sent a chill up my spine. We stayed and watched them for about 45 minutes and then continued on to our camp.

We arrived here just after dark and were led up to reception and then on to our tents. The tents are amazing!! Tiled floors, granite vanity, marble shower... I want to move in and never leave! At night we're not allowed to exit our tents without an escort and from the baboons chattering on the rocks behind my tent I don't think I'll argue with that rule. There are also Cape Buffalo and Lions nearby... so we're all going to be careful.

Before dinner... Sandi surprised Tom and told him that she was taking him on a balloon safari over the Serengeti. Tom looked and us and kept saying, "you're kidding,.... you're kidding right?!" It took a few seconds for it to sink in that we weren't playing a cruel joke on him and he was actually going to fulfill a dream of going up in a hot air balloon... he was pretty over-whelmed and happy.

We were escorted up to the dining tents by our Maasai Warriors and had an amazing 3 course meal. While we were having dinner in the dining tent the skies opened up and we had a thunderous rainstorm, our beautiful tents stayed nice and dry.. and incredibly cozy.