April 11, 2012  •  Leave a Comment
So today... Sandi and Tom were woken up at 4am and on the road by 4:30 to go to the launch point of their Balloon Safari. Being a chicken has its advantages as I was able to sleep in until 6:30 before having to get ready for my game drive. Harry and I left to go pick up Sandi and Tom.. on the way we saw all the regular animals and some special ones as well. 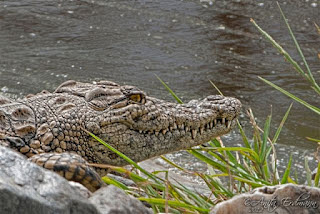 Harry spotted two leopards near a river... it took me a while to figure out where they were.. but sure enough there was a mother and her yearling baby walking off through the grass. Then we came to a hippo pool and next to it was a pool with 3 crocodiles in it. One of the crocodiles was sunbathing in the sand... its mouth was wide open and you could see all its sharp teeth.

Around 10:30 we met up with our certified ballooners! Both Sandi and Tom were beaming! They saw a snaking line of the great migration from the sky. They had a few tense moments when their balloon crashed into the top of a tree.... but other than that they had a great time! 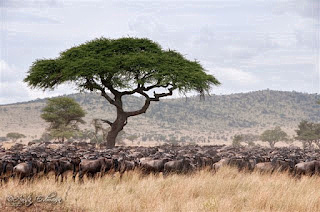 We drove to see the migration............ words cannot describe the scene that was laid out before us. There were probably 50,000 or more Wildebeest and Zebra stretched out for as far as the eye could see. They were moving in a steady, mindless forward motion... not even stopping to graze. As the heat of the day began to rise... the huge herd broke into smaller herds, each one grouping together under whatever shade tree they could find. No photo that I took could accurately show what we saw. 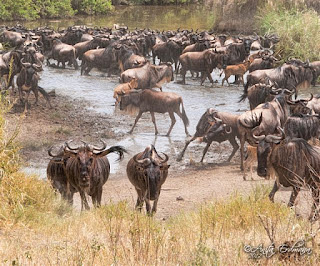 Prior to this trip I didn’t really know that the wildebeest and zebra travel together during the migration. The zebra are the smarter of the two creatures and they are supposed to be able to sense/smell the rains…. So they lead the way and the wildebeests follow. 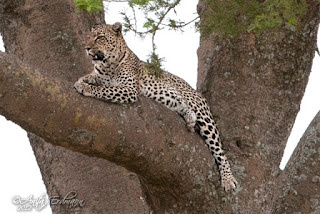 We went back to were the leopard was yesterday and today we found him up in a tree. He was snoozing and occasionally moved to try to get more comfortable. He had stowed a dead impala in a tree a few 100 feet away.

Our final stop of the day was a giant hippo pool.... you can pretty much smell a hippo pool way before you see it. We got out a took photos of the gigantic beasts sleeping in the water... every now and then they would flip their tails and shoot out a stream of poop. The girl who sung that she wanted a hippopatumus for Christmas obviously didn't see and smell what we did!!

We're back at our beautiful camp now... we've all showered and are going to wander up to the dining hall for dinner.

We're all still doing good and enjoying every amazing sight, sound and smell (except for the smell of the hippo pools) here in Africa!