April 11, 2012  •  Leave a Comment
Last night I decided to roll down one of the tent flaps covering the screen window. Since it was past 9pm, the generators were turned off and the only light in the room was from a small battery powered lantern, there was another flashlight on the desk. I undid the velcro and the flap came down really quickly and there was a loud thump on the floor. I grabbed the flashlight and shined it down around my feet and saw a very stunned mouse who was trying to figure out why one minute he was sleeping in his cozy little home and the next minute he was tumbled around several times and slammed into the ground. When I shone the light on him he ran behind the desk. Being a typical city slicker, the mouse kind of scared me.... thankfully I didn't scream... but I kept the flashlight trained on him and watched him run back and forth trying to find a hiding place. I eventually gave up and got ready for bed... after all... it was just a little mouse.

This morning at breakfast I told the manager, "There is a mouse in my room.... do you think someone could get rid of it?!?........" She gave me a funny look and said that she would see what they could do..... while I was eating breakfast I realized how dumb I must have sounded to her, this is Africa... we're living in tents surrounded by wildlife! Get over it! 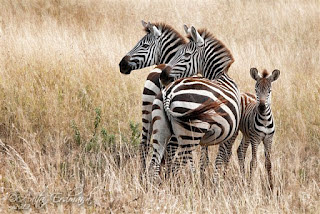 We enjoyed a nice breakfast on the hillside verandah overlooking the Serengeti Plains. We watched the Zebra grazing and rolling in the wet grass.

Today we went on two game drives... we saw cheetah tracks but no cheetah. There are not as many Wildebeest here but we still saw lots of wildlife. On our way back to the camp after our afternoon game drive I got a nice shot of an African sunset. 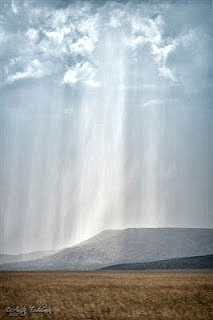 We witnessed the full force of nature on our last night in the Serengeti at Mbalageti. While we ate dinner on a verandah overlooking a wide open valley we watched a huge thunder cloud approach from the west… the flashes of lightning lit up the night sky. Another storm was also coming in from the east. After we finished dinner we sat and spoke to the staff for a while and then decided that we should probably head back to our tents or risk getting soaked. I hadn’t even closed the door before the skies opened and it started to pour. As both of the storms started to converge the thunder and lightning became more and more violent… there were a few strikes that shook the mountain that our camp was on. I watched the flashes of lightning through my tent screen windows and then fell asleep under a warm and cozy duvet in my canopy bed.