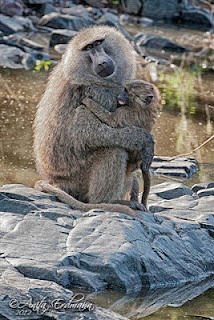 The storm lasted less than 2 hours but as we left our camp this morning to make our way to Ndutu it quickly became evident that the one road in and out had turned into a 16km long mud bog.. we got stuck once but managed to get out after much backing up and lurching forward. I was slightly worried that the river might have become impassable… during heavy rains, the safari jeeps have to park on the one side of the river and guests have to cross the crocodile and hippo filled river using a rope bridge… then another jeep comes to take you the rest of the way. There was more water in the river than the night before but thankfully we were able to drive through! In the middle of the river we saw a Baboon trying to comfort her frightened little baby... the mother had a look on her face that must be universal amongst mothers. 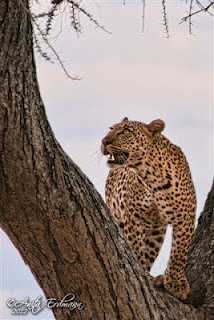 Harry drove back through the central Serengeti and where we had seen a 50,000 wildebeest and zebra a few days earlier… all we saw was wide open empty grasslands. We could hear the drivers talking to each other over their radios asking, “Where is the migration!?! Our clients are complaining!” We were obviously very lucky to have been there to witness it earlier! Harry made his way to the leopard tree and we weren’t disappointed when we saw a leopard high in the branches with a fresh kill. After a few minutes he stood up and began walking across the branch and then down the trunk of the acacia tree. It sounded like machine gun fire as every camera in the 20 or so jeeps sprang into action… shutters were blazing! The big cat disappeared into the deep grass and we got ready to leave when Sandi shouted that he was on the road behind us! En mass… all the jeeps tried to get the best spots near his new tree. We stayed and got a few more shots but the leopard soon fell asleep on his branch and all you could see were his legs swaying in the breeze. 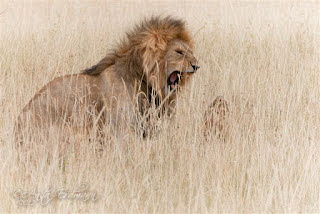 So Harry said, “Lets go find you some lions!” and away we went. We drove a fair distance, stopping once to take photos of a large bird with a poofy crown on his head (the name escapes me right now) and then drove until we saw the line of jeeps on a small hill. We got a good spot and could see a large male lion nearly completely hidden in the grass. We patiently waited and had our boxed lunches… hoping the smell of salami sandwiches and pasta salad would waken the slumbering beast. All of the sudden a female lion rose out of the grass and strode towards the male. He got up to meet her and after a short exchange she lay down in the grass and he mounted her and did what male lions do! Exhausted from his 10 seconds of lovemaking, he once again flopped down in the grass. We figured that this was the last we’d see of the pair so we began to drive away… but wait…. There was another male and female a little further down the road! While we were waiting for these two to show themselves… the first pair got up and started to head towards the road across the field. We sped to where they now were and got to see them in relatively short grass next to the road. What an amazing sight to see the large male with his long mane blowing in the wind only a few feet from us… it’s a picture I won’t soon forget!

We had to leave sooner than we had hoped because our permit to be in the Serengeti was going to expire in 1.5 hours.. so we had to make our way to Ndutu. We managed to get to the main gate and leave the Serengeti with about a minute to spare and then drove off onto a dirt road towards our new camp. 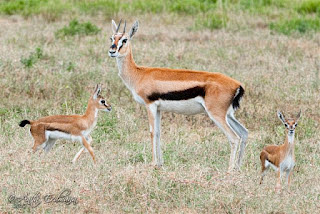 This area is overflowing with wildlife! We saw thousands of Thompson Gazelle with cute little newborn babies. There were huge Storks and the heaviest bird that can fly (a Kory Bustard or something like that..) 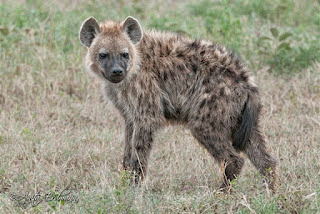 We passed two young and fuzzy hyenas…. Then an older and very pregnant looking hyena... the young ones are cute but the older one just looks nasty! We saw two young jackals…. they ran alongside our jeep and then crossed infront of us. There were Impalas and Grants Gazelles.. a few wildebeest and some zebras. Then in the distance we saw four jeeps grouped together which probably meant that there was another big cat. We went to join them and wow…. A pride of 8 lions fast asleep! The jeeps slowly drove around the cats… we were no more than 10 feet away from some of them with our windows wide open. But they couldn’t have cared less… nothing was going to wake them from their naps!

After getting a couple hundred shots of sleeping lions we drove on to our camp. 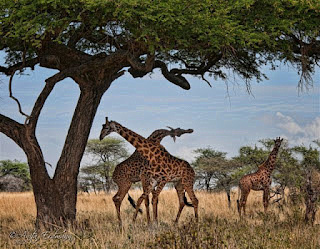 We passed a group of giraffes….. not 3 or 4 like we had seen elsewhere… rather 20 or 30! All sizes with many little babies. In the distance we saw a water buffalo.

As we turned into the parking area of our lodge we saw 4 little Dik diks…. Two adults and two young ones. For those who don’t know… a Dik dik is a very very small deer.. they’re only about 16 inches tall.

They welcomed us to the camp with delicious iced tea and then took us to our comfortable stone cottages overlooking Lake Masek. While we were talking on our verandah before dinner…. 3 more Dik diks walked by and then a golden bat flew out in front of us. I think we’ve hit the wildlife jackpot here in Ndutu.

When we entered the main building for dinner we saw two Genet Cats in the rafters… I guess they’ve become residents here and help to keep the rodent and bug population down. So we had a nice dinner of lamb while the Genets prowled overhead!

Time for bed now…. Tomorrow we’ll see what else Ndutu has in store for us… hopefully we’ll be able to spot a Cheetah!