Last night after midnight the camp was awoken by the roars of a lion, a large pride had passed in front of our camp while we were all sleeping.

This morning we had a nice warm breakfast and then we went off in search of wildlife. Harry drove towards the big marsh and we quickly spotted a pair of Bat-eared Foxes playing around a shrub. We drove further and saw two young foxes right beside the road, napping at the opening of their den. In the distance we could see two more fox families.. they blend so perfectly with the colour of the ground that if they weren’t moving you probably wouldn’t see them. Their ears are absolutely HUGE, every now and then the sleeping foxes would give us a quizical look and then go back to sleep.

Further down the road we saw two young jackals, the sun was glistening on their beautifully coloured coats. 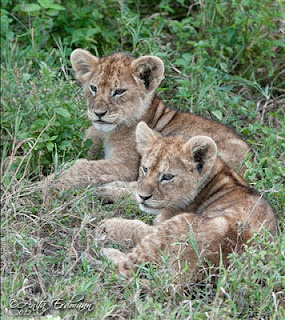 We drove around the marsh and then up into the plains, before too long we spotted a group of 4 jeeps clustered around a tree so we slowly made our way towards them. As we got neared we could see a large female lion resting in the shade of the tree and sprawled out in the grass around her were three adorable little cubs!

The cubs alternated between snoozing in the shade and looking wide-eyed at all the jeeps and commotion around them. As usual, the cameras were blazing. The mother lion occasionally opened an eye to see that her babies were okay. 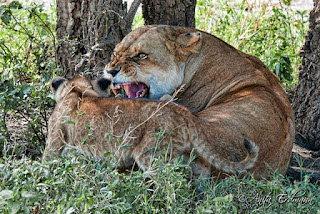 After a while one of the babies went over to mom and wanted to nurse…. She snarled at the little cub and we all got a good look at her 4 inch fangs! After much snarling she finally allowed the cub to nurse and the other two came over and joined their littermate. 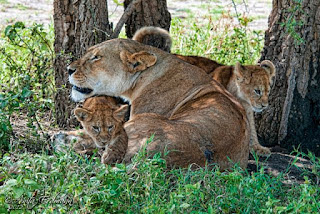 Once their little tummies were full they strode off into the grass to rest. One of the little babies stayed out in front and looked so regal as he watched over his littermates and mother. 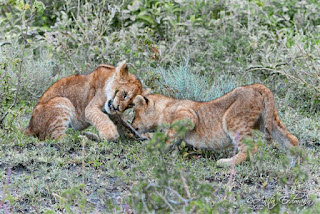 Harry continued on and we saw more jeeps on the horizon… as we got closer we could see three full grown cheetahs. It looked as though they were out hunting. One of the big cats had a pretty bad limp and a swollen ankle but he managed to keep up with the other two. There really was nothing for them to hunt so they slowly made their way towards a shade tree.

We came back to the lodge for lunch… Chicken tangene, couscous, chuckula chuckula and tossed salad …. Followed by papaya sorbet for dessert. Noboody is going to lose weight on a safari.

We’ll go out again this afternoon until sunset and see what other wildlife we can find.

We decided to go back to see the lioness with the three young cubs. We found her where we had left her, this time she was out in the open and the cubs were a little bit more active. We watched them play for about 20 minutes and then the lioness decided to get up and move away. As she walked away we noticed that she was limping and had a big gash on the inside of her leg and a puncture wound on the outside. Life is not easy here even for the mightiest beast. I pray that her leg heals so that she can continue to provide for her 3 beautiful babies.

We just returned from our afternoon game drive. Since coming to Africa the only time I would have complained about dust was during our drive on the Serengeti highway up to the northern part of our trip, since then we’ve managed to follow the rains and the ground was always damp. It rained in Ndutu the day before we arrived so the driving conditions were fine until this morning… on our morning drive we noticed that the dust was quite heavy but Harry said that this was nothing. The day has been hot, so this evening the dust was even worse than before…. Any slight breeze would kick up a huge cloud. However, according to Harry this still wasn’t that bad. I enjoyed a nice shower with Ndutu lake well water which is extremely high in soda… so even when you’ve rinsed all the soap off, it still feels as though you need to rinse some more. You can’t drink the water but the occasional drop that touched my tongue tastes just like baking soda.

Tomorrow we go to Ngorongoro crater… hopefully we’ll see the only animal on our lists that we haven’t seen yet… the Rhino. I don’t think that our next camp has the internet, so this may be my last message until I get home.