April 11, 2012  •  Leave a Comment
Ndutu day 2
This morning we went in search of a Cheetah… one of the guests had told me that they saw one yesterday in a wide open field about 15 minutes from our lodge. Harry’s intel from one of the drivers was that there were Cheetahs down by a marsh… so we headed off in that direction.

After driving for about an hour we didn’t see anything but some birds and a deer hiding in the reeds… so we made our way back towards camp.

We stopped at the rangers station and used the washroom while Harry asked where the Cheetahs were. The toilets were 'lovely' holes in the cement floor… but beggars can’t be chosers! 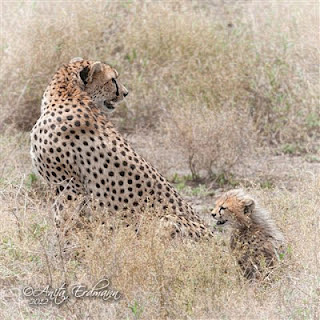 The rangers told us to go 8km down a dirt path and we might see something. Eventually we came to a huge open grassy field and saw 3 jeeps in the distance… this was a good sign! When we got there we saw a large Cheetah and 4 cheeky kittens!! The mother started to head off into the distance towards two young impalas while we babysat her cubs. 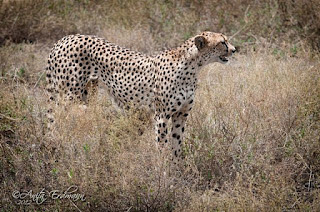 She lowered her head and every move of her body had purpose. The impalas walked right past her… she let the first one walk by and as the second one walked only a few feet in front of her she sprang into action. The chase only lasted about 7 seconds… the impala zigged and zagged a few times but the Cheetah closed in with each stride… the end was very quick. 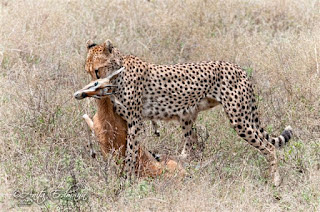 As soon as the impala was down… every jeep in the vicinity raced off towards the cheetah… I was worried that someone would run over the babies but thankfully that didn’t happen.

The mother dragged her kill nearer to the babies and then lay down in some taller grass to catch her breath. The 4 babies were about 100 feet away not once taking their eyes off their mother. She lay there for about 5 minutes before making two chirping sounds… at which the cubs ran straight towards her. 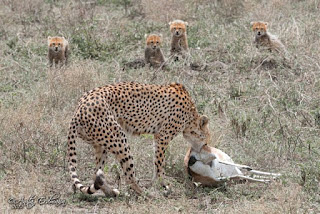 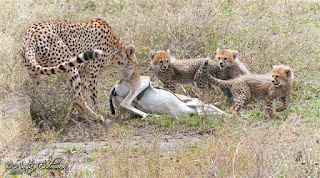 We watched for about 30 minites as she dragged her kill to try to find some shade. Each time she dropped it near a jeep… the jeep would start up and drive away from her. We watched her getting more frustrated and decided that after shooting our 2000 photos it would probably be best to drive away and try to give this little family a little bit more peace. 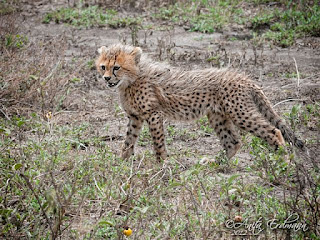 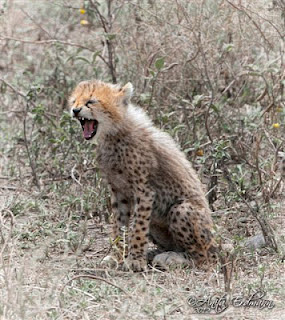 I believe that when I think of this trip, seeing this beautiful family of Cheetahs will probably remain as my most vivid memory of Africa.