I can't hardly believe the conversation I had with someone on Facebook.... I probably shouldn't be surprised actually!

I had been following a fellow photographer who had some very nice images of captive animals.  People were liking his photos, as they should because many of them were spectacular.... but some people would question him and ask how on earth he was able to get shots like those of cougars jumping from one rock to another in Canyonlands, Utah.  He'd reply that he was known as the 'Cat Whisperer' etc.

He admitted to me in a private post that the particular photo in question was with a 'handler' and made some excuse about having "clients who become edgy if they think that his shots are of captive animals... and considering that 95% of his shots are of wild animals, he can't afford to lose those three clients who would then begin suspecting everything."  ??

Then I saw him post this on the photo that he just admitted to me in private... was of a captive animal with a handler controlling said animal,

"I was actually stalking him, from above, There is a previous image posted. Waited for an image against the Monti LaSal Mountains. When he got to that point I stood my ground to see if he would go back to do the jump he had done in the distance going the other way. Had Bear Spray and a 357 and enough room to get out of his way. He did back off and went back but in the meantime ended up above me on the slick rock about half way there. That part was a little foolish as in my haste I did put myself in danger."

When I read that, I laughed out loud and almost choked on my soda!! At no point was he stalking the mountain lion, he was most probably in a group with several other photographers. The animal trainer was most likely encouraging the mountain lion to jump back and forth from rock to rock with either treats or a lure toy. Had the photographer brought bear spray or a '357' to the photo shoot, the trainer would most likely have asked him to pack his bags and go home. Also, there is probably NEVER enough room to get out of the way of an actual wild cougar! (what a doofus) At no time did he 'put himself in danger'.... because the trainers number one concern is safety, for both the photographers and the animals in their care! His sensational story... was just that a sensational 'story'!

I just think that the ethical thing to do is post that an animal is either captive or that its a controlled situation.  If you have clients who don't agree with photographing captive animals, then I'd make the decision to either not shoot captive animals .. or to be okay with losing them as clients.... I wouldn't lie or make up a good story!  Because I always post that an animal is from a game farm... no one would ever need to question my honesty!

There are wildlife photographers who actually spend weeks out in the wild, tracking animals... kudos for the dedication and hard work that goes into their photography and for getting shots of actual wild life.  Shame on the photographer who claims to be doing the same thing and takes credit for doing the same thing, but actually just drove up to a filming location and waited for the animal to be brought to him.

Personally, I don't have the time, energy or skill to be able to track a mountain lion in the wild... I'm a weekend photographer.  I originally went to a wildlife photography workshop at Triple D Game Farm with Paul Burwell because I was planning a trip to Africa and wanted to learn how to shoot wildlife properly.  Over that weekend, not only did I learn how to compose a pleasing photo and countless other things from Paul, I completely enjoyed photographing wildlife in natural locations, exhibiting natural behaviours.  I know that my chances of photographing a mountain lion in the wild are extremely slim because even if I saw one, by the time I got over the shock and had my camera focused in his direction... we would be long gone because that is the nature of wild cats. And what are my chances of shooting an Amur Leopard in the wild, when there are less than 40 left?  So I have gone to shoot captive animals at the same place that National Geographic and Nature go to film.  I go to Triple D because they are respectable and take care of their animals properly.  They give me the opportunity to safely photograph these beautiful and endangered animals... I come back with hundreds of photos which I can share with friends and strangers alike.... and hopefully because they see the beauty in the animal, they decide that wildlife needs to be respected and conserved.   I'm not trying to pat myself on the back here... but I choose to always post the photos and let people know where they were shot, because I think its the right thing to do.  I stand behind my photos for what they actually are and feel no need to lie or make up a big story to help stroke my ego.

Its a shame that the photographer in question has beautiful photos... but I'll never be able to look at them with any degree of respect again.

So there is my rant on ethics! 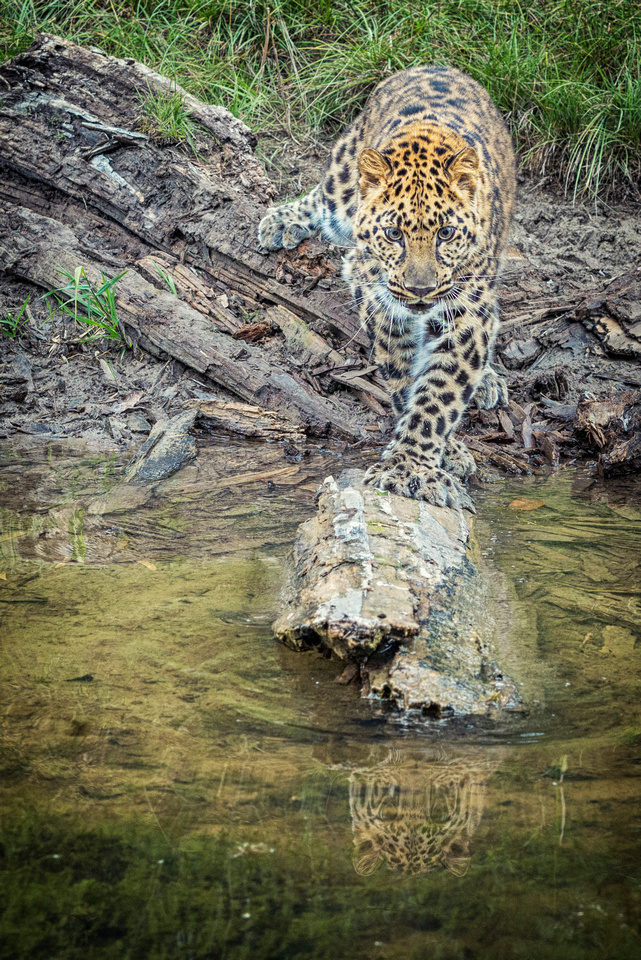 Amur Leopard, Triple D Game Farm MontanaLess than 40 of these Leopards exist in the wild and this beautiful cat is one of less than 300 in captivity.

Marg Wood(non-registered)
I often laugh at other photographers who disclaim where their shots are from, I met you at our very first triple D workshop and have been hooked since. I also have great shots from africa and occasionally from actual wild animals, such as taken in Alaska. But, like you I usually post where they were taken. I dont think I did on the first workshop, I just assumed that everyone would know that those wonderfully set up shots were from captive animals. Since then I usually tell people exactly what the name of the animal is, or where this come from. My purpose of posting these shots is so that more people and children can see these beautiful creatures and appreciate them, and ....hopefully...respect them and be aware of our (human) influence in these creatures habitats etc. P.S. If I EVER come across a wild cougar with my camera in hand and ready to shoot...someone bring me a diaper...I will need it!
Daryl L. Hunter(non-registered)
Good post Anita, I wish all captive animal shooters had your ethics.
Douglas Pollitt(non-registered)
Anita I totally agree it is extremely unethical! I always even tell people where I had the pleasure of shooting my pictures. I get nothing for promoting the places that I visit but I want anyone who has the desire and means to visit a quality operation. One that I know will give them even more than they can even imagine. Large cats in particular are next impossible to shoot inn the wild without using a camera trap or some other remote method. I post that mine are largely taken at the Triple D Game Farm in Kalispell, MT. They do an exceptional job making ure you get the shot that you are wanting to capture and everyone makes you feel special. Now I'll get off my soap box. These people only fool the uninformed and that is a shame!
No comments posted.
Loading...
Subscribe
RSS
Recent Posts
How did the Fuji do? Switching to Fuji How to shoot the Milky Way Iceland is AWESOME! Iceland here we come! Looking back on 2014... Back from Botswana, Namibia and Zimbabwe..... Only 19 more days until I leave for Botswana Botswana - Take Two The Palouse at Night
Keywords
anita erdmann photography 2014 Botswana Night africa Kalahari Palouse safari farm
Archive
January February March April May June July August September October November December
© Anita Erdmann Photography
Powered by ZENFOLIO User Agreement
Cancel
Continue